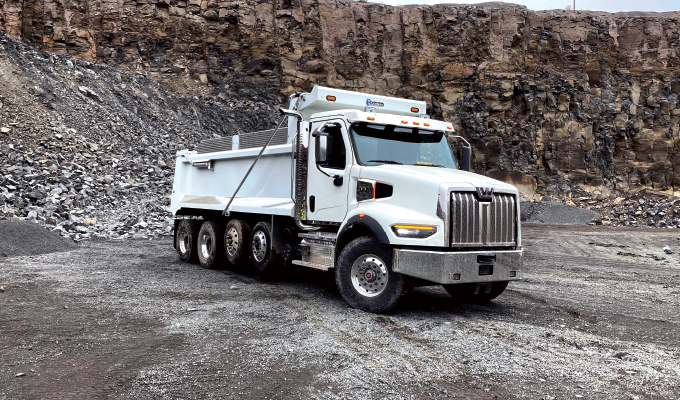 It’s new. It’s bold. It’s tough. It works hard, and it’s sexy. No, I’m not talking about the latest Hollywood release. I’m talking about the latest Western Star release—the vocational Western Star 49X. If you didn’t think a work truck could be described as glamorously, think again. A few seconds spent in the truck’s luxurious cab and turning heads as you roll on the highways and city streets will prove you’re an object of envy. And if you’re a fan of Modern WorkTruck Solutions, you’ve already gotten a sneak peek of the truck.

Back in October, you read a Western Star 49X Preview, but since then I’ve gotten behind the wheel of the boss of a truck. I would classify this review as the second part of the Western Star 49X preview, so if you haven’t already, I encourage you to read the piece. Find it at mwsmag.com. 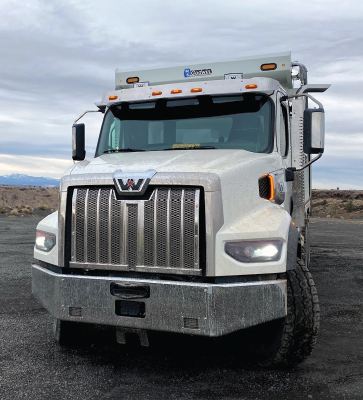 If you read the Western Star preview from our October issue, you know a little bit about the truck already. But spending time with the designers and engineers of the truck gave me an immersive experience and an “insider’s” perspective. Samantha Parlier, VP of Daimler Trucks North America’s vocational market development, gave me a quick runaround of her favorite aspects of the truck. One of which is the easy access to the RP1226 connector port via the 49X’s QuickFit Port located on the top of the dash.

The port is essentially a precut hole in the top of the dash with a rubber covering. The port is elevated higher than the rest of the dash for protection against potential spills. This QuickFit Interface System makes it easy to integrate truck equipment to the truck’s electric power sources without having to drill holes and bust through the dash.

“We looked at what the customer was doing, and we came up with a really simple and elegant solution,” Parlier says, explaining the innovation is a favorite of hers because it shows just how much thought Western Star put into the product. She adds that the area is also loadbearing, able to hold fleet management equipment.

The Western Star 49X also includes a FlexPanel on the dash facing the driver. This panel is easy to remove (it only uses four screws) and gives owners the flexibility to integrate tablets or an additional 24 switches, up to 10 gauges, or any combination of the two. The fact that it’s easy to remove also helps upfitters when they need access to electric wiring when installing vocational equipment.

The ease of upfit for this truck goes further than interior conveniences. The sides of the 49X’s hood is reinforced with steel plates. This is great for applications such as snowplow that require lights installed on the hood. These plates give upfitters something to mount to. And unlike other trucks that leave some wires exposed, in the Western Star 49X there is an integrated pathway to protect the marker light wiring from chaffing, splash and spray, and road debris.

Speaking of wiring, a member of the Western Star team told me that truck owners in the industry shared with the team that a common problem was protecting wiring. So the team went to work to improve and protect the wiring all throughout the truck from the hood to the end of the chassis. Standard on all Western Star 49X models is a protective cover for upfit/application wiring called “tough wrap” that protects the wiring from failures due to abrasion. This wrap is designed for the life of the truck, so you’ll never have to worry about replacing it.

Additionally, the vertical exhausts on the 49X, although attractive in their own right, are completely functional. The exhaust system flows up and onto the outside of the frame rail, then it flows inward and back again. This route was designed for two reasons: 1) if you’re installing a PTO unit, you don’t have to worry about the location of the exhaust pipe, and 2) to have a 15-inch length of flex tubing between the exhaust outlet and the fixed B pillar. These 15 inches of flex pipe make it less likely for the pipe to crack and break. This shows yet another way the engineers had vocational applications in mind when designing the 49X.

One thing that was repeated over and over while with the Western Star crew was the attention to detail and how much the crew listened to their customers’ needs and desires. And with all the minute details displayed across the 49X, Western Star’s listening skills definitely shine.

For those who voiced visibility as a concern, Western Star gave the 49X a back glass that is 77% larger than today’s Western Star 4700 if you get all three available window panels. If a customer is concerned with the durability of the back glass, they have the option of choosing polycarbonate panels that withstand rock strikes to the window.

This attention to detail even makes this truck easier to sweep out. A member of the Western Star team pointed out the aluminum footplate in front of the door on the floorboard of the cab. This footplate is designed for better traction for safety and to be able to knock the dirt and mud off your boots upon egress. But it’s also designed with a slant on the edge that faces the cab. This edge allows for quick and easy sweeping of the truck’s cab. (I mean, did Western Star seriously think of everything?)

OK, so the 49X is truly a vocational dream. But is it safe? 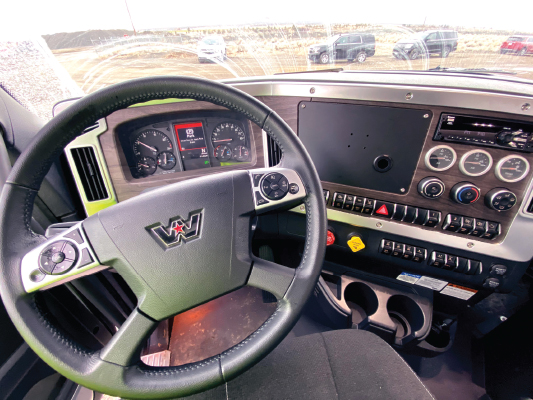 Safety is something we discuss with every truck, and the Western Star 49X features a safety suite that rivals those in passenger vehicles. You learned about Detroit Assurance in the 49X preview. Western Star touts Detroit Assurance as being the most advanced safety system in the vocational market, and I’m not here to tell you they’re wrong. We tested the Detroit Assurance system on Western Star’s test track, and I was surprised to see how far technology has come in a few short years.

We tested the Active Brake Assist 5 that detects distance and speed to both moving and stationary objects in the truck’s path. As stated back in October, this system works down to 5 mph, hence the name. But that’s also a major plus for applications that run high-trafficked routes in the city. We tested the system using a dummy blow-up vehicle tethered to a pickup truck at a safe distance. We simulated a scenario where another vehicle quickly swerved in front of the truck. We went from 45 mph to 0 mph in a matter of spit seconds. Whiplash? Maybe. Rear-end collision? Nada. I will admit, there was an instance where we did bump the blow-up vehicle, but the impact of a bump verses a full collision can save a life—and that’s something worth investing in.

Other safety features include an audible lane departure warning that imitates the sound of crossing over rumble strips, adaptive cruise control, and Side Guard Assist.

At the end of the day, a truck is a tool to get your job done. But a truck made specifically for vocational applications, designed for quick and easy upfits, and with a luxury feel can be what sets your business apart from the rest.

Jade Brasher is the editor of Modern WorkTruck Solutions magazine. A graduate of The University of Alabama, Jade resides in Kennesaw, Georgia, and enjoys writing about her town, travel, and of course, work trucks. Reach her at jade@mwsmag.com. Find out more about the Western Star 49X, visit www.westernstartrucks.com.