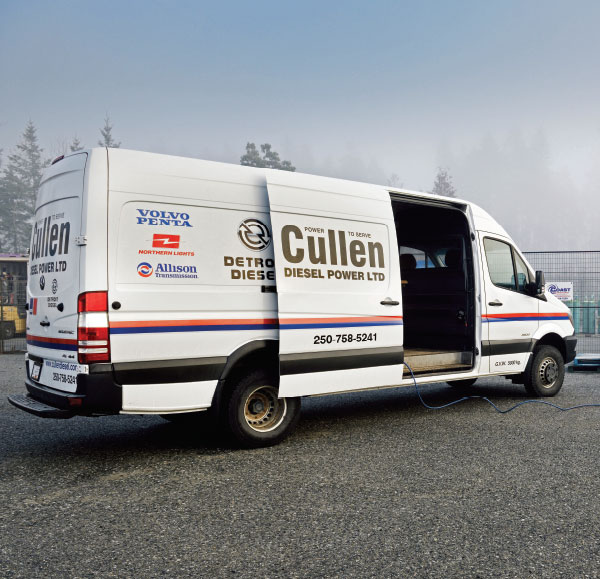 Dennis Miskow is the branch manager of Cullen Diesel’s Vancouver Island operations. Miskow’s career with Cullen started more than 20 years ago when hired as an apprentice heavy-duty mechanic. Miskow shares his process on choosing the best equipment for his fleet:

When it was time to add a new service vehicle to replace an aging truck in his fleet of seven, Miskow went straight to his truck builder. “I spec’d out a truck with a crane and was ready to place the order. It was going to cost about $150,000, so I decided to compare it to the cost of a commercial van. The van ended up being half the price.” Because of the significant savings, Miskow decided to explore commercial van options. “We chose the Mercedes-Benz Sprinter over the other vans because the Sprinter comes in a 4×4 option, which is necessary when we’re traveling to jobs in remote locations,” Miskow says.

Though the initial draw to the service van was cost, Miskow was aware of other benefits that come with a van as opposed to a truck. “The van is a smaller vehicle, which makes it easier to drive and maneuver. We do service jobs right at the docks, so the van is the best option for driving to these marine applications,” Miskow notes. The Cullen Diesel branch manager also appreciates the extra level of protection from theft and the elements the enclosed space of the van offers. “Tools and equipment are kept safe inside the van from theft, but also from rain, sleet, ice, and snow. My team also appreciates the enclosed area to store and organize their tools instead of standing around the outside of the truck in all types of weather.” In addition to the cost, size, maneuverability, and enclosed protection from theft and weather, the van acts as a moving billboard for Cullen as there’s more advertising space on the van’s body.

Having never used a Mercedes-Benz Sprinter or any service van on his fleet before, Miskow was concerned about how it would hold up in challenging applications. Cullen Diesel services a lot of equipment found in remote areas, often requiring its vehicles to travel in mountainous areas up logging roads. “I wasn’t sure how the van would be able to make it up the logging roads, even though the Sprinter is a 4×4. But on its first service, it drove easily up to the jobsite right behind the trucks. Even our logging customers were impressed,” Miskow shares.

Another concern was just how long the Sprinter would hold up in these challenging, dirty, and demanding applications. “You see a lot of vans used as delivery vehicles driving on the roads, but we weren’t sure how it would hold up after continuously being tested on trails and logging roads,” Miskow says. But fast-forward to years later, and Miskow confirms he no longer has any worries. “It’s been three years, and we haven’t had any problems with the van.”

Overall, the decision to add a commercial van to the Cullen Diesel fleet positively impacted Miskow’s operations. “We’re looking to add another vehicle to the fleet, and I want to get another van,” Mikow says.

Miskow chose Sterling Fleet Outfitters, a commercial van and truck equipment upfit company, to modify the Sprinter to be as functional as possible for Cullen Diesel. Sterling Fleet is experienced in cargo van upfits and had plenty of options specifically designed for Cullen’s Sprinter. When choosing an air compressor for the van, Miskow reflected on the performance of Cullen Diesel’s current gas drive air compressor.

“We knew that the gas drive had lots of problems. It was bulky, it was space-sucking, it was dirty, and we had to fix it constantly,” Miskow explains. “We were so used to it, we just accepted that it was a high-maintenance piece of equipment that we had to deal with.”

However, the growing popularity of service vans led to advances in specialized equipment, such as air compressors built specifically for vans. “My mechanic specifically asked for a VMAC UNDERHOOD Air Compressor for the van,” Miskow says.

The under-the-hood placement of the VMAC UNDERHOOD40 Van Series Air Compressor saves space in the cargo area and solves common safety issues, such as toxic fume exposure and risk of gas fires, faced by many operators with standalone gas air compressors installed in the cargo area. With the VR40, the only space required in the cargo area is 1.7 cu ft for a combined air/oil cooler and air/oil separator tank.

It’s been three years since Miskow installed the UNDERHOOD40 Van Series in his Sprinter, and he can easily list its top three benefits:

Cullen Diesel’s team services and repairs mining products, marine and logging equipment, construction and industrial equipment, generators, and trucks and buses with Detroit Diesel, Mercedes, and Allison transmissions. A typical day consists of mechanics traveling down to docks for marine repairs, up to logging camps, and to other remote locations. Cullen Diesel’s Mercedes Sprinter is well-equipped for this kind of work.

Adding VMAC’s UNDERHOOD air compressor to the Sprinter was just the right pairing. “Investing in the right tools for the job is part of the professionalism that Cullen Diesel is known for,” Miskow notes. “The Sprinter van provides a modern look for our service vehicle and having an UNDERHOOD air compressor tucked away is part of that clean, professional look we’re striving for.”

When looking for a great vehicle and great equipment to get jobs done as quickly and efficiently as possible, Cullen Diesel found its dynamic duo to be the Mercedes Sprinter and VMAC UNDERHOOD40.

Anne Fortin is a digital marketing specialist at VMAC, a manufacturer of innovative air compressors and multi-power systems. Anne joined VMAC in 2017, having previously worked in the tech sector. On her off-time, Anne enjoys traveling and spending time with her boyfriend, Fabian, and their labradoodle, Mortimer (Morty) Meatloaf. Find out more, visit www.vmacair.com/blog. 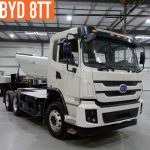 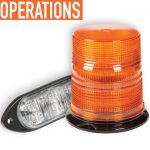