If you took a trip outside of North America within the past few years you might have seen a Ford Ranger out and about—even when they weren’t available in the US. Although Ford ceased production of the Ranger in the US in 2011, the truck continued production globally, even becoming Europe’s best-selling pickup by 2015. Ford redesigned the global Ranger in 2015, featuring a new look and advanced safety technologies. This design was used to revive the truck for the North American market.

Although Ford looked to unite the long lost little brother of its truck lineup to the US and Canadian market once again, the brand took its time releasing the Ranger on this side of the pond. Why the wait? Maybe Ford wanted to wow a market that is already flooded with pickups. Maybe the competition is stiffer in North America than it is globally. Who knows exactly? But one thing is for sure, Ford wasn’t just sitting around awaiting a launch date. The team of engineers behind the new Ford Ranger for the US and Canadian market was busy.

Thankfully Modern WorkTruck Solutions gathered some insight from the chief program engineer for the North America Ford Ranger to help understand the reason behind the Ranger’s eight-year hiatus and offer more technical information than the Ford Ranger review on page 14.

The global Ranger and North American Ranger both feature a new, second-generation 2.3-L EcoBoost engine that gives owners both efficiency and capability. It features a direct-injection fuel system, twin-scroll turbocharger, and a 16-valve design.

The Ranger features auto start-stop technology. At a full stop, this technology automatically shuts down the internal combustion engine (ICE) to reduce engine idle. Once the driver removes their foot from the brake or presses the accelerator, the system restarts the ICE and performs as usual. Auto stop-start technology gives the owner benefits of reduced fuel consumption and lower emissions.

For those traveling off-road in their Ranger, the pickup features a twin-chain-driven cam and a forged steel crankshaft and connecting rods.

The Ranger shares much of the same internal hardware as the F-150 and F-150 Raptor. It features a standard Ford-built SelectShift 10-speed automatic transmission to bring its turbocharged power to the road when you need it most. The 10-speed transmission features optimized wide-span gear spacing coupled with drag-reduction actions that help deliver improved acceleration and performance. For those who tow, three overdrive gears help improve Ranger’s efficiency at highway speeds and optimize the Ranger’s towing capability. Shifting performance is also increased due to the truck’s lighter weight through its composition of advanced materials and alloys.

As you read in the Ranger review, this truck is loaded with technology. The driver assist technology available in the Ranger takes some of the everyday stress out of a driver’s job and helps maneuverability anywhere from city streets to backwoods roads.

Drivers can take advantage of safety technology including Blind Spot Information System (BLIS) with Trailer Coverage. BLIS uses radar technology in the tail lights of the Ranger to detect vehicles in the blind spot of the driver. BLIS with Trailer Coverage monitors up to 33 ft of trailer length, covering almost any trailer towable by a Ranger. And if you tow more than one trailer, configure each trailer and the Ranger can save its profile (up to three trailer profiles). 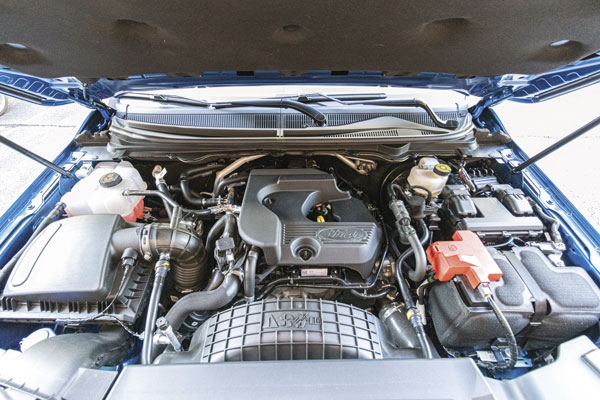 Convenience technologies include SYNC 3 with FordPass Connect, compatible with Apple CarPlay and Android Auto. The Ranger is also available with an embedded 4G LTE modem with a Wi-Fi hotspot that can connect up to 10 devices—perfect for a driver’s mobile office phone, tablet, and laptop. Finally, a premium audio experience is offered from B&O PLAY.

What does it take to build a truck that’s “Ford Tough”? To put it simply: testing, testing, and more testing.

Ford sought to design, engineer, and test the Ranger to wear the Built Ford Tough distinction in the North American market. The Ranger is tested to the same conditions and durability requirements as the F-150 to deliver the same capability expected from the brand’s customers. These conditions are extreme—including everything from sub-zero ambient temperatures to ultimate hot max-tow conditions at the Davis Dam in scorching 100+ degree, high-altitude heat.

For the range of capability and capacity Ranger owners need, Ford gave the mid-size pickup a fully boxed high-strength steel frame with six rigid cross-members and frame-mounted front and rear full-steel bumpers for added strength and a more capable payload. To ensure that the Ranger handles jobs in the city and off the beaten path, it includes a double-wishbone independent front suspension, monotube dampers on all four corners, and electric power-assist steering for control, precision, and comfort.

The build of the vehicle is shared almost everywhere—suspension and chassis included. However, details of the North American Ranger have been tailored specifically to the US consumer. A Ford Ranger can be purchased in almost 200 countries, yet Ford found the US consumer’s weekday and weekend interactions with the truck are different than any other consumer. A Ranger owner in the US travels different road surfaces, is willing to commute further for work and pleasure, and even their driving patterns are distinct solely to the US/Canadian market.

To accommodate for its distinct market, the North American Ford Ranger’s fully boxed frame is formed from high-strength steel with six cross-members, reducing weight and creating a smoother on-road ride and improving off-road performance. It also features a frame-mounted steel bumper with tow hooks. On the FX4 Off-Road package, reviewed in this issue, the Ranger features a frame-mounted heavy-gauge steel front bash plate as well as frame-mounted skid plates for added protection when clearing boulders and mud to access remote destinations. 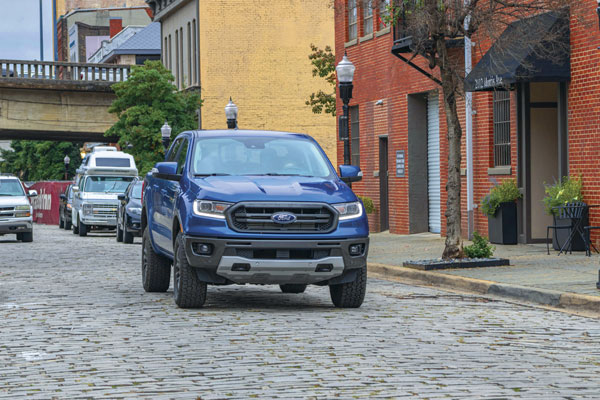 The front suspension of the North American Ranger differs slightly from the global Ranger. It uses a double-wishbone independent design including a welded high-strength-steel control arm and a forged-aluminum knuckle to reduce weight. All Rangers feature live-axle rear suspensions with leaf springs, but the North American truck includes a lighter, class-exclusive parabolic leaf spring, offering less friction than a conventional spring.

Through research, design, engineering, and testing, the North American Ranger was truly tailor made for US and Canadian consumers. What caused the truck to become a best seller in Europe was only a launching pad for what was to come for the North American market. And now that it’s finally here, aren’t you ready to take it for a spin?

This article contains contribution from the chief program engineer for the North America Ford Ranger. Find out more about the Ranger, visit www.ford.com.