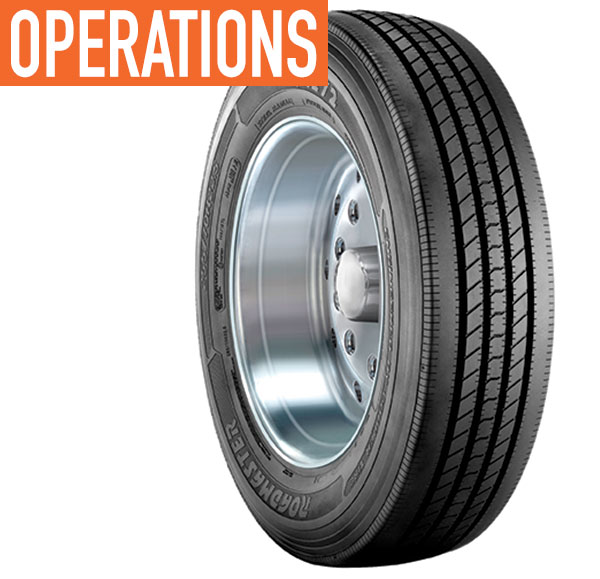 When the engineers at Cooper Tire & Rubber Company set out to design a new Roadmaster brand tire—the RM272—for drop-deck trailers, they knew creating a product to withstand the demands of the application would be a challenge.
“Tires in this application are arguably the most abused of any in the trucking industry,” says Reuben DeBolt, commercial technical services manager for Cooper Tire, assigned to the Roadmaster brand. “We set out to engineer a tire that could take the punishment that carriers dish out, but we also wanted to ensure we stayed true to what Roadmaster is all about: excellent quality at a reasonable price.”
For several months, DeBolt and his team used computer modeling and advanced finite element analysis to test various ideas for tire shapes and structures. The team also evaluated various tread compounds for their ability to withstand the enormous lateral pressures the tires endure.

According to DeBolt, when trucks pulling spread-axle trailers make a turn, an enormous amount of force is transferred from across a tire’s total footprint to its shoulder rib. “We looked at a variety of tread profiles that could minimize the load on the shoulder rib,” DeBolt says. “We worked toward a design that allowed the tire to slide more easily and distributed the load more evenly across the tire’s entire footprint, so that the shoulder would take less of the brunt of the lateral forces.”
The forward axle on a spread-axle trailer is typically 10 feet from the back axle, spreading the weight of the load more evenly. As the trailer turns, it pivots on its back axle, and as a result, the tires on the trailer’s forward axle scrape along the ground (scrubbing) sideways through the turn. As much as 60 percent of the 5,000 lbs that drop-deck trailer tires carry transfers from the footprint to the shoulder rib of the front axle tire on the inside of a sharp turn. This loading and scraping can potentially tear the shoulder rib, which can cause big chunks of the tread to rip off.
“Imagine the force at play here,” DeBolt says. “With 3,000 lbs of lateral force now concentrated on the shoulder rib, any tire that’s not designed to handle this kind of abuse can experience significant damage. It’s no wonder that when we tested several other tires sold in this market, the shoulder ribs literally tore apart, just as they can do in the field. Drop-deck spread-axle trailers, without a doubt, represent one of the very toughest applications in the industry for highway tires.”
Extreme scrubbing, like what the Cooper Tire engineers put the Roadmaster tire through in their testing, is rare in the field. But, when combined with more routine scrubbing and curbing, it can cause tires to find their way to the scrap pile quicker than their long-haul counterparts. “That’s due to the damage drop-deck trailer tires experience when they scrape along the ground,” says DeBolt. “What’s more, that damage can cause roadside inspectors to take a more critical look at all of the tires and the vehicle, as well. That’s why drop-deck trailer operators often have to replace tires long before their treads are worn.”
Featuring a four-belt steel casing, the RM272 has a slightly rounded tread footprint, along with a reinforced shoulder, to help withstand extreme side forces. “And, it has a tread compound that provides the best balance between resistance to side forces and optimum wear,” says DeBolt.

As Cooper Tire engineers developed some options for the new Roadmaster trailer tire, the RM272, they knew testing would be difficult. For a spread-axle trailer tire, the tire industry had no standardized test that adequately simulates the varied and extreme conditions under which drop-deck trailers operate.
“We tried several different test protocols at commercially available test sites, but we were not able to replicate the conditions we had seen on some tires returned from the field,” says DeBolt. “We had to create our own.”
So, the company’s engineers developed proprietary testing procedures and built a small test facility near the corporate offices that could adequately simulate the road conditions the tires might encounter in delivery areas.
“We poured three concrete test pads and treated the pads to simulate three different road surfaces,” DeBolt says. “We then dragged the tires, under full loads, across each of the test surfaces to simulate the dragging they would experience out in the field, maneuvering in tight quarters. Think of running your fingernails down a chalkboard. That’s what we were doing to our test tires, and those of our competitors.
“What we put the tires through during testing—all the stresses and forces—is comparable to the worst conditions one could expect to see in the field,” DeBolt says. “Our goal was to design a tire that performed above the call of duty in this tough service and yet still retained the capability to be used in all positions.
“We think we’ve succeeded in designing a great tire,” DeBolt adds. “Test results have shown the Roadmaster RM272 withstands the scrubbing and tearing that drop-deck spread-axle trailer tires can experience in everyday operating conditions. We also back the tire with a strong warranty, offering six years and two retreads,” he concludes. 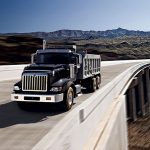 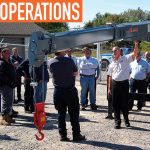