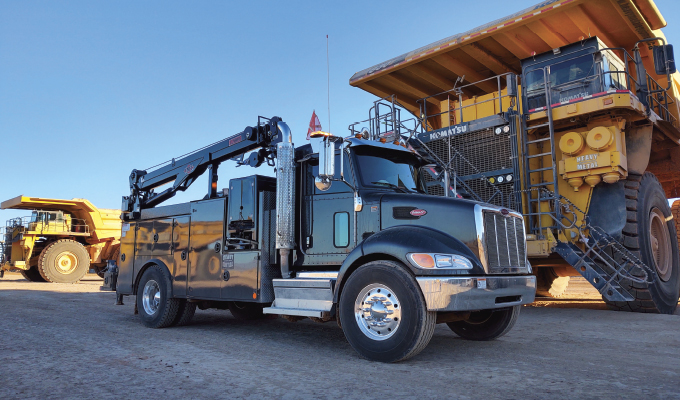 At a young age Alex Stursa remembers riding shotgun in an Iowa Mold Tooling Co., Inc. (IMT) truck alongside his dad on the winding roads of Nevada and thinking that when he grew up he wanted to own an IMT truck of his own.

Years later, Stursa is now the owner of Design Build Maintain Equipment Repair (DBM), a heavy equipment, machining, and welding company based in Fernley, Nevada. DBM uses a fleet of service trucks to take on a variety of jobs in the mining and construction industry, with nine IMT trucks in the company’s fleet of 10 trucks.

Stursa started DBM in 2016. At the time, he and his wife had a baby on the way, and Stursa decided it was time to consider what he wanted for his future.

Stursa was struggling to find funding for his first work truck when a good friend, who owned a heavy equipment repair company of his own, reached out and offered to front the cost of the truck and let Stursa lease-to-own it from him.

“He runs IMT, and so when he got me started he said, ‘Hey, if we’re getting you a truck, I’m calling Lodi, and we’re getting you set up with an IMT,’” Stursa says. “And that’s how I got started. It was kind of a full circle moment. Things have just spiraled and grown from there.”

In the early days of DBM, the company’s fleet was made up of a variety of trucks. But as it grew and operations expanded, Stursa transitioned his fleet over to run new and refurbished IMT trucks. 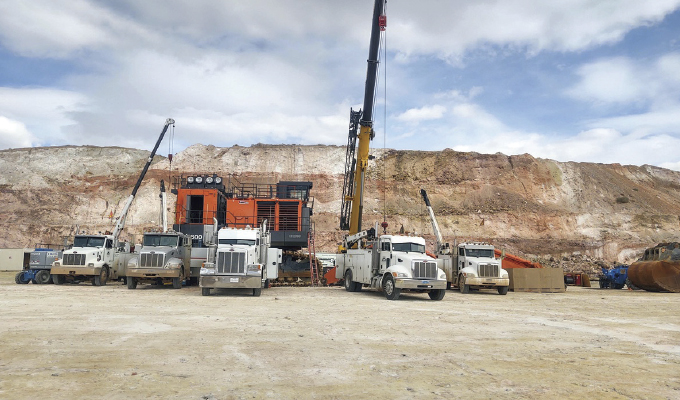 Whether it’s being sent out into the field for a line boring job or to help with dismantling a piece of equipment, every day is a little different at DBM.

And because every day is a little different, DBM requires rugged trucks that can take on the tough terrain of construction and mining jobs and provide the run time that’s needed to get the job done.

“No matter what job we go to, I know if I send an IMT truck out there, it’s going to get the job done,” Stursa says.

More often than not, you’ll find Stursa behind the wheel of his truck or out in the field alongside his crew. As a truck operator himself, Stursa understands what his crew is up against and that they rely on having a quality, reliable truck to help them get the job done.

“One of the most important things to me is the usability of the truck,” Stursa says. “My guys usually run 12-hour shifts with an hour drive each way or more, so they’re in their trucks 14-plus hours a day. They’re in them more than they are at their houses or with their families.”

That’s why Stursa turned to IMT service trucks to run his fleet. IMT products are developed and manufactured to deliver unparalleled quality, enduring value, and top of the line performance. IMT products incorporate carefully crafted details to ensure that end user experience is simple, intuitive, and above all, reliable.

“(IMT trucks) are really hardy,” Stursa begins. “The mines we work in use magnesium chloride to keep the dirt stuck together on roads so it doesn’t get dusty, but it also causes everything to rust really badly. The paint holds up really well on the IMT body, and the rust situation is not what it is with some of the other brands I’ve used. IMT also makes it so that the trucks are easy to clean and maintain. I’ve had issues with other manufacturers where the bodies crack really badly in certain spots from flexing, and my IMTs don’t.”

Recently, DBM put two of its IMT trucks to the test on a mining job after a crane that was needed for the job was delayed due to inclement weather.

“We were building some CAT electric trucks at a mine, and we needed a crane to put the front spindles on, however, the crane didn’t show up,” Stursa says. “We had two service trucks there and got permission from the mine to use our own trucks, which had crane accessories on them, to place the spindles on the electric truck.”

In doing so, DBM was able to provide its client with cost savings by avoiding the need to use the crane and were able to get the job done quicker while avoiding unplanned downtime.

“Not only did we save a bunch of downtime, we finished the trucks five days ahead of schedule,” Stursa explains. “We ended up building three electric trucks for them and just kept using our own trucks with the attached crane accessories to complete the job.” 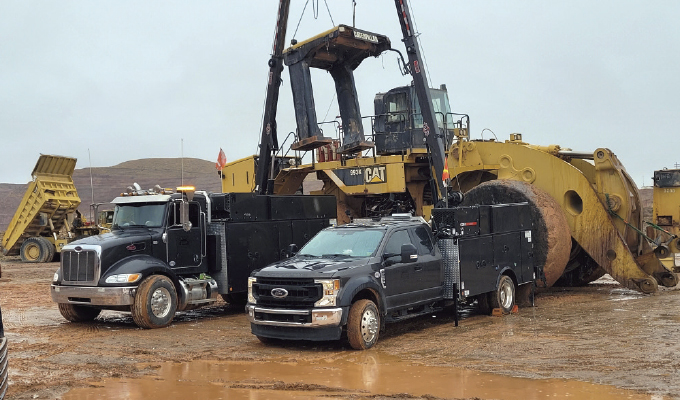 IT TAKES A TEAM

The rugged, reliable performance that IMT trucks offer isn’t the only reason that Stursa chose to run almost all of DBM’s fleet on IMT.

Another benefit of having almost all of the trucks in the fleet be IMT is that they are able to share parts across trucks and that employees are familiar with the trucks’ bodies and setup.

“I keep a decent parts selection on hand, and it makes it really fast to do replacements and repairs because even if I have one guy go off shift and the next guy comes on, he has the exact same truck body so he knows where something is if a part needs to be replaced because he has it on his truck,” Stursa says.

IMT also makes maintenance easy by publishing its product manuals and literature online so that they are available for reference when an end user or technician is working on a truck.

DBM also has a strong relationship with its IMT distributor, Lodi Truck & Equipment.

“Another factor that led me to go with IMT is the closeness of Lodi and the phenomenal team they’ve got over there,” Stursa says. “Anything you need, they’ve got it. They know the parts. And with us being in northern Nevada and them in northern California, we are able to get parts sent to us really fast.”

“My dad ran an IMT truck for 15, 20 years, and I knew that one day I wanted to own my own. Now I’ve got a bunch of them and plan to purchase more,” Stursa says. “Later this year, we’re going to put an order in for two more trucks.”