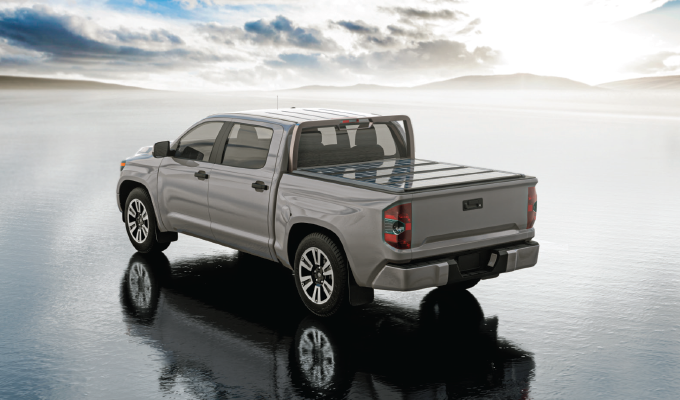 Sometimes fleet vehicles need to provide power for more than just the engine, lights, and automatic door locks. Many fleet owners employ generators to power their tools on the jobsite, which is a great option if you have extra fuel lying around. But who has extra fuel just lying around? And if so, why waste it on tools and emit unnecessary greenhouse gasses into the air. For those whose workload requires extra power here and there, it could be time to say goodbye to that fuel sucking generator and hello to a smarter source of power.

Don’t worry. What makes it a “smart” energy source isn’t the fact that it operates using AI, that it requires owners to download an app on their smartphone, or that it requires a bachelor’s degree in computer science from its operator to work efficiently. No, what makes this power source smart is the simple fact that it’s practical and stores energy from the sun. Worksport brings to the work truck industry its new tonneau covers equipped with solar panels to capture solar energy for use with tools, gadgets, and anything else that might need a power boost throughout the work day.

The TerraVis (pronounced terra-vees) captures and stores up to an estimated 3kW of power in battery packs that line the bed of a contractor’s truck. Within the battery pack, Worksport provides one unit that houses a 4,000W AC inverter and features two 2,000W outlets for tools and devices. And the best part—this unit is fully portable. Contractors need only to unclip the unit from its station and carry it to the work area to power tools. This unit can fast-charge from the bed-mounted battery banks in only 15 to 30 minutes. Contractors need only to return the pack back to its position in the truck bed during their lunch break, and the pack is ready to use when they return.

Its use is comparable to that of a generator’s yet its operation and efficiency are easier on the environment and take up less room in the truck bed.

All that sounds smart enough, right? But is it practical?

TerraVis is a fully functioning tonneau cover. It keeps tools and materials safe from the elements and secure when kept in the yard or on the jobsite overnight. It’s also tough enough for the worksite. It features a fiberglass paneling for durability, and the solar panels are made of an acrylic Plexiglas. Practical, you ask? We think so. 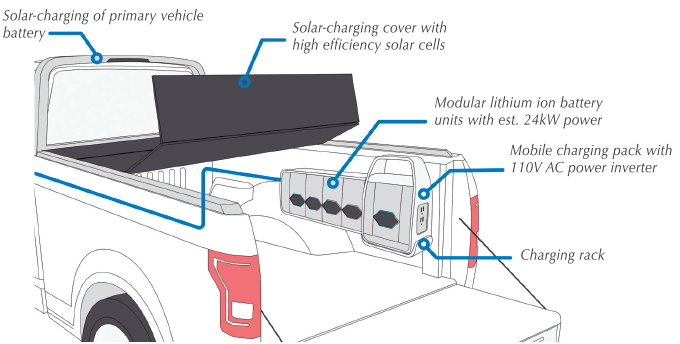 HOW DID IT START

The idea for the TerraVis tonneau cover system began with contractors in mind—think specifically: fighting over power sources at the jobsite. Steve Rossi, Worksport CEO and TerraVis inventor says the idea started there. Power sources were the problem. Now how to find the best solution? Rossi says just about all contractors drive a truck, and often on the back of their truck is a blank canvas of a tonneau cover waiting to be used. Thus the idea was born.

Steven Rossi says the TerraVis system will start with pickup trucks because that’s the company’s core competency, but that doesn’t mean TerraVis will be available only for pickups. The company has plans to make TerraVis available for “anything that transports,” be it recreational, commercial, or even marine. Rossi says the brand will roll out TerraVis for work vans and trailers next year; there’s already a prototype in the field, and Rossi says “it’s working amazingly.”

TerraVis has the ability to be used as usage power, such as to power tools and devices on the go, or as moving power, like providing additional power to an electric vehicle. Rossi’s dream for TerraVis is to be used on many electric vehicles to give EV drivers more range confidence.

“Ninety percent of the US population needs 40 miles or less for daily use,” Rossi begins. “TerraVis can provide 8 to 10 miles of free power each day—30% of the power needed without innovating currently.”

Imagine if TerraVis were modified to power even more than just 10% of an EV driver’s daily commute—what if it could power the entire commute? That is Rossi’s exact target for TerraVis one day soon.

Even now, the power grid in North America is too weak to fast-charge mass EV use. With TerraVis’ capabilities of carbon-free, solar power, the brand could seriously pick up some of the power grid’s slack.

Until then, contractors have a good excuse to leave their generators at the office and invest in a more practical, smarter power solution.