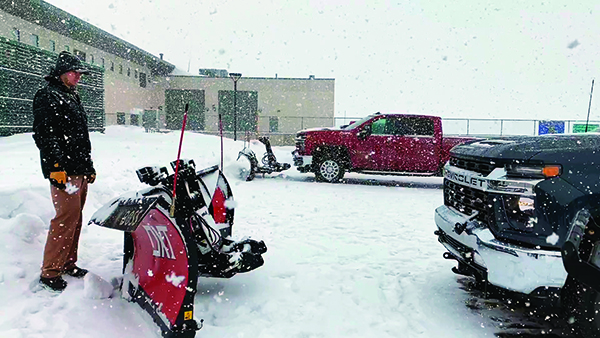 If you didn’t read part one of this feature, you might want to check it out. You’ll learn more about the Silverado HD used to plow the snow in Marquette County, Michigan, back in February of this year. If you did read part one, it’s time to discover how well the truck fared in the freezing snow while hooked to a BOSS snowplow. We’ll also discover how tough these BOSS snowplows really are.

Once at our destination, all of us experienced journalists and media professionals were anxious to get out and play in the snow in the comfort of a Chevrolet workhorse. Our playground was Sawyer International Airport where we were granted a couple of hours behind the wheel of a Silverado HD equipped with a BOSS snowplow. However, very few if any of us had ever operated a snowplow. Therefore as a precaution, the BOSS snowplow crew prepped the course for us a bit as the rest of us enjoyed the snow from the view of a window while sipping hot coffee. 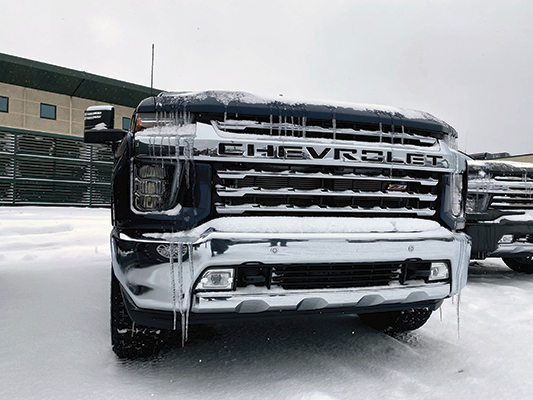 When it was finally time to get out in the snow, we all bundled up—me in my heavy coat and snow boots that I bought specifically for this trip—and headed out to the fleet of Silverado 2500 and 3500 HDs.

What’s the point in having a great snowplow if your truck is no good? On the flipside, what’s the point in having a Silverado HD that’s built to plow when your snowplow is, well, less than spectacular? Before we went out into the snow, the folks at BOSS gave us a rundown of the snowplow industry: what contractors expect from their plow and plow manufacturers, typical applications for plowing, plows used, and ice control equipment. Turns out from BOSS’ research, snowfighters want an easy-to-operate, reliable product from a manufacturer that is there when help is needed and stands behind their product. BOSS strives to meet all of those expectations.

If you’re unfamiliar with the industry (as I am being from Alabama), you’d be surprised at the work, equipment, and possible headache that goes into being a snowplow contractor. Think: Long shifts that begin at any hour of the day and end only when the job is done; specialty equipment that is right for the job; and keeping watch for homeowners getting in your path while clearing their driveways and vehicles passing you while plowing.

Due to the stressful nature of the job, it’s important that at the very least, a snowplow should be capable. When running the grounds of the Sawyer International Airport, I realized what a long, difficult job snowfighting can be without proper equipment, which, thankfully we had. Each Silverado HD was equipped with BOSS snowplows of all kinds: straight, expandable, and V plows. BOSS touts itself as being the number one brand of truck plows in the United States, and after plowing for a bit myself, I could see why these plows could be considered the boss.

One thing I’d like to note about BOSS snowplows is their operating controllers. These devices can be hand held, dash mounted or floorboard mounted—whichever you find increases efficiency. We used a hand-held controller in our truck. The controller had an on/off switch at the top and five, large buttons, which was great for inexperienced snowfighters like myself, but it’s also great for guys and gals who plow long hours during the winter. Having only five buttons simplifies operations and gives crews one less hassle to juggle. The backlit buttons were simple to read and even easier to use, so I could focus on the task at hand—pushing that snow. 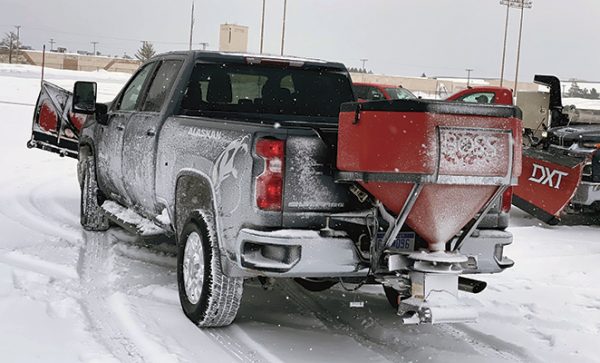 The kind of plow you’ll use really depends on the job. Our truck was equipped with a straight plow, so there were areas of the Sawyer airport course we weren’t able to drive in without several passes with the V plows first. I’m told V plows are great for breaking up snowbanks whereas the straight plow is best for plowing lots and driveways. However, just because you’re pushing snow without breaking snowbanks doesn’t mean the job isn’t tough. It took several passes in the same area for the crew in my truck to clear a safe path, and we also tried a little snowbank-breaking action of our own. “You’re not going to hurt the plow,” said Mark Klossner, VP of marketing at BOSS, as we cut into the sides of the bank. He was the designated snow plow expert for the crew of journalists in my group. 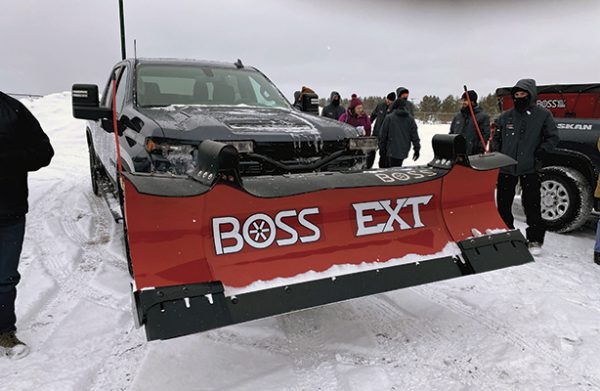 Perhaps he said we wouldn’t hurt the plow because of our hesitation to get too close to the snowbank. Once we started hitting the bank, the noise from the plow-to-snow collision shifted our casual conversation to a nonconfrontational screaming session. In addition to the noise, the truck jarred and jolted as the plow tore through the sides of the bank. I was nervous we would do some serious damage to the plow or the truck, but they both held tight, proving their capability and then some. After the V plows trudged through the more difficult part of the course that was deemed too dangerous for the straight plow, Mark was able to get us into the trenched area.

Looking into the trench, I could tell it had been passed by snowplows several times over the past hour. Yet when we got in to plow through it, it seemed as though we were the first ones to make a pass. Rough would be an understatement. I will say, however, the whole experience was one of the most exhilarating of my career. Not only was it a thrill to cut through the snowbanks and give the plows a beating, it was also quite fun seeing all the journalists in other trucks ramming into snowbanks and bouncing through the trenches themselves.

If this trip taught me one thing, it would be to show mad respect to all the snowfighters who run plows for hours on end. I don’t know if I’d be tough enough to endure on a daily basis the noise and the jarring I experienced from just a few hours—and this was on a closed course. I can’t imagine what it’s like for snowfighters in the public who must maintain constant awareness of other vehicles and pedestrians crossing their plow’s path.

It didn’t take long for the other journalists and me to understand just how tough a snowplow must be to get the job done. And the same goes for the truck that’s pushing it. At the end of the day, many factors determine whether it’s a good or a bad day of snowplowing. But the one thing you don’t want to have to worry about is the capability of your truck and your equipment. With a Silverado HD and a BOSS snowplow, along with the customer and dealer support from both brands, you’ll have two fewer things to worry about on your shift as a snowfighter.

Jade Brasher is the editor of Modern WorkTruck Solutions magazine. A graduate of The University of Alabama, Jade resides in Tuscaloosa, Alabama, and enjoys writing about her town, travel, and of course, work trucks. Reach her at jade@mwsmag.com. Find out more about BOSS snowplows, visit www.bossplow.com.