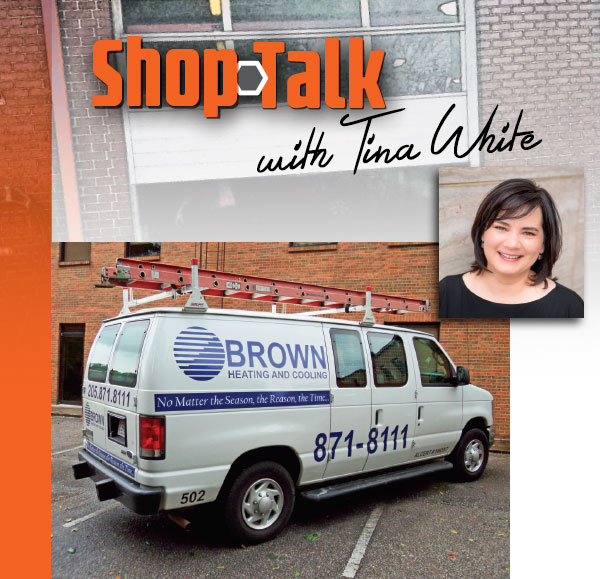 Tina White laughs when asked why the HVAC company she and her husband Jamie own is named Brown. She’s ready with a funny answer. “The company is Brown, owned by the Whites, and the logo is blue.” It doesn’t take a genius to realize Tina’s been asked this question many times before. She readily explains that Charlie Brown Heating and Cooling was founded by its namesake in 1961. Her husband’s parents purchased the business from Brown in 1984 and dropped “Charlie” from the name. In 2015, Tina and Jamie bought the company when her in-laws retired, capitalizing on the established name and reputation, while changing some of the management rules to make it their own. “I call it my 56-year-old startup,” White laughs.
When a technician joins the team at Brown Heating and Cooling, he is provided a list of items for equipping his company vehicle, and then is free to set up and organize the vehicle to his liking. “We give the guys the list of things they will need, but aren’t strict about how they arrange them,” says Tina White, co-owner of the Birmingham, Alabama, HVAC company. “It’s really cool to let the guys put their own personality in the truck. We all organize very differently, so we give them training and tools they need to be successful and we get out of their way.” This method works well for Brown, as it instills a sense of ownership in its employees. They drive their company trucks home at night, and dispatch from home each morning after checking a company-provided iPad for the schedule.

TOOLS FOR THE JOB

Items each Brown tech needs to get the work done depends on his job title and responsibilities. The company services and installs heating and cooling systems in existing construction across the greater Birmingham area, making an average of 375 calls per month. “We help small businesses, churches, industrial-size buildings, and homeowners refresh, restore, replace, and repair their heating and cooling systems,” White says. Some techs install new systems, while others address various aspects of servicing them. To provide the space necessary for each individual tech’s tools and equipment, the company’s 14-vehicle fleet has a variety of years, makes, and models, including: two 2014 Ford E-250 vans, two 2008 Ford E-250 vans, a 2013 Ford Transit Connect van, a 2011 Ford Transit Connect van, a 2009 Ford F-150 XL truck, a 2005 Ford F-150 truck, a 2012 Ford F-250 XL truck, a 2009 GMC Sierra 2500 HD truck, and a 2010 Toyota Tundra.
There are a handful of features needed on all service and installation vehicles, including ladder racks on roofs, bins for stowing air filters so they don’t get broken or bent, shelving for storing refrigerant tanks, shelving for loose parts, as well as those kept in original boxes with reference paperwork, and a GPS system. Beyond that, techs customize them individually. 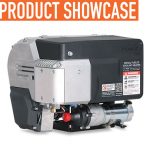 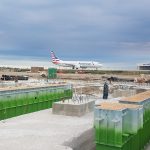