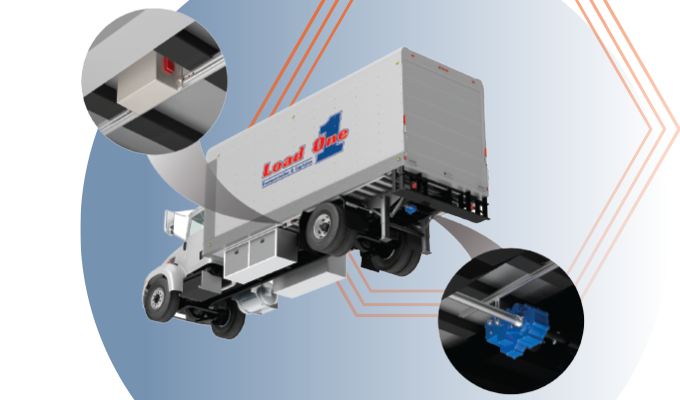 By using aft-mounted landing gear, fleets can keep the deck of a box truck stable and flush with the dock during loading operations using heavy forklifts.

The use of landing gear is ubiquitous throughout the commercial vehicle industry, and it’s no different when it comes to vocational trailers. Construction, DOT, refuse, logging, mining, telecom, and utility fleets use a variety of flatbed, lowboy, drop deck, and gooseneck trailers in the course of their work. Whenever operators detach these trailers from their tractors, they must hand crank the trailer’s landing gear into the down position before decoupling. Conversely, each time an operator wishes to move a trailer, they must hand crank the same landing gear back into the up position.

The sheer repetitive motion of cranking landing gear mechanisms up and down can tax muscles, tendons, and joints, particularly in the case of aging drivers, and the fact remains that the median age of truck drivers continues to rise. The Bureau of Labor Statistics estimates that the average age of a commercial truck driver in the US is now 55, while, according to a driver shortage report by American Trucking Associations, the average age of an over-the-road truck driver is 46.

Depending on the equipment and circumstances, it can take between 50 to 60 crank arm rotations to get the legs on a trailer’s landing gear to the ground. This task can increase driver turnover by keeping some otherwise great drivers from working or coming back to work after an injury. Anyone who has ever had to perform the task knows that operating a landing gear crank arm can be as awkward as it is physically taxing. Even if the operator is young and uses the proper technique one hand is supposed to be placed on the trailer to help maintain balance, which means all the burden is placed on one hand, arm, and shoulder.

In March of 2020, AIRman Products introduced Automated Landing Gear Deployment and Retraction Technology. This motorized solution to the manual landing gear problem takes a time-consuming and hazard-prone task out of the equation by simply and conveniently automating it.

With the flip of a switch, AIRman’s patent-pending device eliminates the manual cranking required to raise and lower a trailer’s landing gear, thus reducing driver exposure to a variety of musculoskeletal injuries, including damage to shoulders, knees, the back, and upper body.

“During our initial market examination, the fleets we surveyed told us that shoulder, back, and rotator cuff injuries were at the top of their list for workers’ comp claims and that cranking landing gear up and down was not only causing, but exacerbating these injuries,” says Shane LaHousse, vice president general manager of AIRman Products. “Operating a vocational commercial vehicle can be a physically demanding profession, so our automated system focuses on one primary stressor, making trailer drops and hookup operations safer and faster, while improving the truck driver experience and as a result, driver retention.”

ONE SIZE FITS ALL

The 15-lb, electrically driven unit can be OE-installed or retrofitted in less than one hour and is compatible with all existing landing gear makes and models. Using the new technology, a driver can effortlessly deploy and retract landing gear in less time than it would take to do either operation manually.

Now, fleets with trailer populations comprised of multiple trailer brands fitted with varying types of landing gear can upgrade using one piece of equipment and a single source. So, whether a fleet is ordering the AIRman Automated Landing Gear Deployment and Retraction Technology on new trailer builds, retrofitting its existing trailers, or both, it will still be increasing its parts inventory by just one SKU.

The system comes complete in kit form with all components and mounting hardware included. Installation is simple and requires the removal of just two bolts on the landing gear crossbar, the attachment of the AIRman landing gear actuator, and the reinstallation of the crossbar.

“The electrical interface is uncomplicated, requiring only a simple 12-volt power supply,” LaHousse says. “The unit’s solid-state unit control box mounts under the trailer, and its two-way toggle switch user interface mounts to the side of the trailer frame rail for easy access.”

Once installed, the unit requires no maintenance. AIRman’s trailer landing gear actuator is self-contained and requires no lubrication.

“I was impressed with the simplicity of the design and the ease of installation,” says Nick Dana, lead mechanic for Michigan-based Ideal Transportation. The company hauls heavy equipment and flat stone with its fleet of flatbed and drop deck trailers and boulders with its fleet of gravel trains.

“AIRman has created an intelligent and practical solution that’s fast and easy for fleet maintenance folks to deploy,” Dana adds.

As the industry embraces the technology, one thing is clear: Drivers love it. Fleets have reported drivers not only favoring, but specifically requesting the trailers with the automated landing gear.

“We worked with AIRman by field testing their automated landing gear technology,” Dana says. “From the time we installed the first unit, drivers have shown a distinct preference for it because it’s just easier to press a button than to turn a landing gear crank, and it’s faster than hand-cranking.”

According to AIRman, Ideal Transportation’s experience is not singular. In fact, the company believes that once they can get one automated unit installed in a fleet, driver response will take it from there.

Though the use of landing gear is most commonly associated with trailers, that application is not exclusive. The devices are also employed to provide vehicle stability during loading and unloading operations, particularly as it relates to the rear end of box trucks.

With offices throughout the Midwest and Southeast United States, Load One Transportation and Logistics is the nation’s third largest asset-based expedite carrier. The company uses AIRman’s automated technology to power landing gear mounted behind the drive axles on Class 6 Freightliners with 26-ft boxes. When deployed, the aft-mounted landing gear keeps the deck of box trucks stable and flush with the dock by preventing the vehicle’s suspension from compressing and rebounding during loading operations.

“A four- or five-thousand-pound forklift can cause a lot of bounce in the rear end of a box truck, and that can cause injuries and vehicle damage,” says John Elliott, chief executive officer of Load One. “We’re finding more and more manufacturing plants are requiring aft-mounted landing gear stabilizers.”

Elliott suggests that it’s also a matter of loading time and efficiency. When fork truck operators know that the vehicle platform is stable, they can enter and exit the vehicle with confidence that they are driving on a steady surface. However, aft-mounted landing gear also saves time and effort for the carriers.

“Before AIRman’s automated system, our drivers had to manually lower a truck’s rear landing gear when arriving for a pickup and then manually raise it again after loading and before departing,” Elliott explains. “It might not sound like much until you consider our drivers are often hitting up to nine docks a day, so that’s saving each worker 18 cranking sequences.”

Elliott says his drivers tell him that AIRman Automated Landing Gear Deployment and Retraction Technology eases their workload, saves them time, reduces their exposure to injury from strains, and is simple to operate. He firmly believes the new technology enhances worker safety and promotes asset protection for his fleet.

“It’s like manual vs. power windows,” Elliott muses. “Who wouldn’t want the ease and convenience of power, and once you’ve had it, you wouldn’t want to go back to manually cranking your windows up and down.”

BUILT FOR THE HAUL

During the development of its Automated Landing Gear Deployment and Retraction Technology, AIRman conducted temperature, shock, and endurance testing in its own lab. As part of the evaluation, units were put through the equivalent of 10 drop and hook cycles per day for a period of 10 years, or 36,000 cycles, with no observable wear and no failures.

Having more than passed its durability-testing phase, AIRman arranged to have its product tested under real-world conditions. The Automated Landing Gear Deployment and Retraction Technology underwent fleet field-testing on trailers operated by both regional and national carriers.

AIRman’s Automated Landing Gear Deployment and Retraction Technology comes with a three-year warranty standard, and a five-year warranty is available under a fleet agreement.

“This is a product designed to outlast the vehicles it will serve,” LaHousse says. “With its ease of installation, I wouldn’t be surprised to see a single AIRman automated system serve several trailers during the course of its lifespan.”