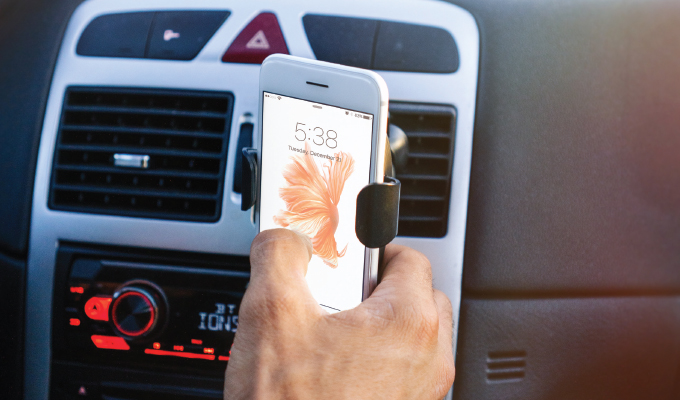 With safety technology becoming more and more required as standard components of newer vehicles and distracted driving laws cracking down on cell phone use behind the wheel, one would think distracted driving would be on the decline. Yet, a survey from Netradyne shows otherwise.

Netradyne is a fleet safety platform provider that uses artificial intelligence (AI), edge computing, and predictive analytics to create a safer environment for commercial drivers. The company recently released the findings of an online survey of commercial drivers. Conducted by Harris Interactive and commissioned by Netradyne, the report indicates that while commercial drivers feel safe, they acknowledge they could be safer, and that AI-powered driving technology can be both beneficial and concerning. Combined with a companion survey of non-commercial drivers, both sets of drivers agree that distractions are on the rise, though there seems to be little self-awareness of who and what is to blame.

According to the National Safety Council, on a typical day, more than 700 people are injured in distracted driving crashes. Results of the survey indicate that when it comes to awareness of distractions, nearly 70% of commercial drivers and 73% of standard drivers want better blind spot detection. But when it comes to saying which drivers are the problem, the results suggest “not me” is the most likely answer. Commercial drivers are most likely to agree that their peers who transport commercial goods (72%) and passengers (69%) are safe drivers. Commercial drivers consider drivers of sports cars (38%) and convertibles (26%) to be the least safe.

Netradyne found that on average commercial drivers drive 7.4 hours per day, and the most common types of goods transported are construction materials (33%), local goods (30%), and foods or plants (20%). Not surprisingly, there are many hazards with longer hours, indicating a need for additional help to make the commercial driving experience, as well as the roads, safer.

A key component of on-the-road safety has been identified as artificial intelligence technology, which can both help and hinder drivers who don’t necessarily understand the technology at this point. For commercial drivers, AI can help with route recommendations, data collection, and even driver coaching. Powered by AI, Netradyne’s Driveri captures every minute of every driving day of thousands of fleet drivers across the country, analyzing road conditions, driving events, and violations. Netradyne is using technology to help make the roads safer.

Mixed feelings about AI technology indicate that it is misunderstood. AI, which can provide ongoing, constructive feedback (such as Netradyne’s GreenZone) appeals to 72% of commercial drivers who say they are open to feedback at least once a week. However, 20% of drivers feel that other drivers may rely on technology more than their own judgement. Still, top commercial drivers use of technology includes hands-free phones (43%), a camera to view the outside of the vehicle (36%), a GPS device (29%), and other assistance that includes lane departure warnings, voice recognition, and automatic braking.

Over 50% of commercial drivers feel that smart tech has had a positive impact on driver safety. This is driven by a belief that smart technologies help them to stay focused when driving (23%) while 21% believe that it gives them the ability to make more accurate decisions. In terms of priority, 69% of commercial drivers are particularly interested in AI technology that will help them monitor blind spots, 68% are interested in information on vehicle maintenance issues, and 63% are looking for technology to feed them information about the road.

“Netradyne has proven successful in making our roads safer for all drivers by equipping professional drivers with AI technology,” says Avneesh Agrawal, CEO of Netradyne. “With greater understanding of the challenges we face on the road, all drivers will benefit by alerts for behavior adjustment, fewer distractions, fewer accidents and injuries, and even lower insurance premiums.”

This Netradyne survey was conducted online within the United States by Harris Interactive from February 25 to March 16, 2020 among 350 commercial drivers. Participants were aged 18-plus and held a commercial driving license and drove a commercial vehicle once per week. Results were weighted for age, gender, region, race/ethnicity, education, marital status, household income, and/or socio-economic status to be nationally representative, with a margin of error of 2% at a 95% confidence level.

The results of the survey show a lack of driver awareness and a “not me” attitude. This lack of self-awareness is part of what Netradyne’s Driveri system for fleets helps to address. Using cameras and AI-powered edge computing, Driveri helps professional fleet drivers become aware of ways they can improve through behavioral motivation produced by Driver Star reports. The frequency of the reports is up to the respective fleets deploying Driveri, as are the perks for improving their good driving scores, but the results are encouraging for everyone who wants safer roads.

“Because of the distractions on the road, the long hours, I believe that every vehicle, particularly those in commercial fleets, should have a camera,” says Adam Kahn, president, Fleet Business and Certified Transportation Professional (CTP®), Netradyne. “Technology is proven to have a huge impact on not only making the roads safer for everyone and reducing distracted driving with in-the-moment feedback, but fleets can save money by avoiding the incidents that the human brain can’t always anticipate.”

With features such as driver recognition, following distance indicators, red light infraction alerts, and driver performance profiles, fleet managers can more effectively coach drivers, and drivers can become more aware of poor driving habits. Perhaps if all fleets enabled cameras and AI-powered edge computing in driver coaching, the results of the next distracted driving survey will be much more favorable.