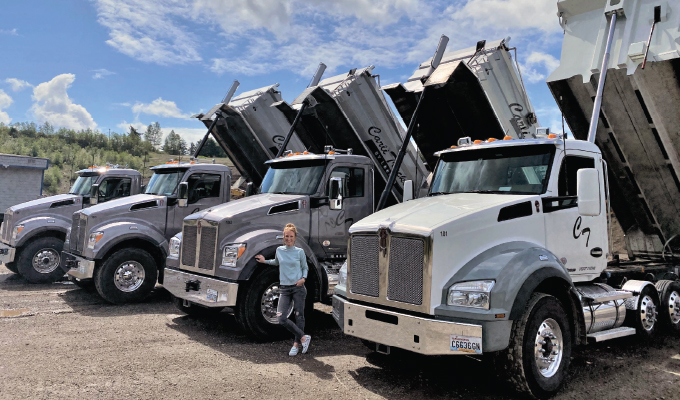 From owning a fitness and yoga studio to owning and operating a successful trucking company that serves contractors in the greater Seattle-Tacoma area, Chelsy Looker is proving to be a talented entrepreneur.

“When I was young, I was a flagger for my dad’s asphalt company (Asphalt Patch Systems), so I was always around heavy equipment,” Looker recalls. “As a flagger, my curiosity of what it would be like to drive a big rig began to grow.”

Even as a success in her fitness career, Looker grew tired of the industry. “As a fitness instructor, you’re a nutritionist, a therapist, a doctor—at lot is expected of you from your clientele,” Looker says. “The time was just right to sell. It was one of the best decisions we’ve made.

After switching from fitness to trucking, Looker worked for her dad’s company for three months driving an older 18-speed Kenworth T800 then driving rental super solos. After just a short stint as a driver, Looker saw the market’s potential. Looker says in 2018, “I saw the niche for it … and I thought, ‘I’m going to give this a go.’” And Carli Trucking by Looker was born.

TRUCKS FOR THE JOB

“When I felt that I was ready to go off on my own, my dad set me up with Rick Barry, who is the new truck salesman for Papé Kenworth Northwest in Lakewood (Washington),” Looker says. “My dad and uncle have worked with Rick since the ‘90s, so they knew he’d help me out.

“I knew I wanted a Kenworth T880 equipped with an OSW Super Dump body. That was never in question—it’s the most productive dump truck out there and what many asphalt contractors are looking to hire. I wanted to start my company off on the right foot with the best equipment.”

According to Looker, the seven-axle Kenworth T880 is a popular truck in the asphalt business because the combination distributes weight to be compliant with bridge laws so that truck operators with super dump bodies can haul a maximum payload—typically 25 tons.

“Not only is the T880 a luxury truck by way of appearance and in-cab comforts, it’s also the most efficient when it comes to laying asphalt, especially when paired with the OSW dump body,” Looker says. “It takes less time for me to complete the load.”

In the beginning, she wasn’t sure how she’d find work or how busy she’d be, but she shares that her truck was booked for a month before she even got it home from Texas. 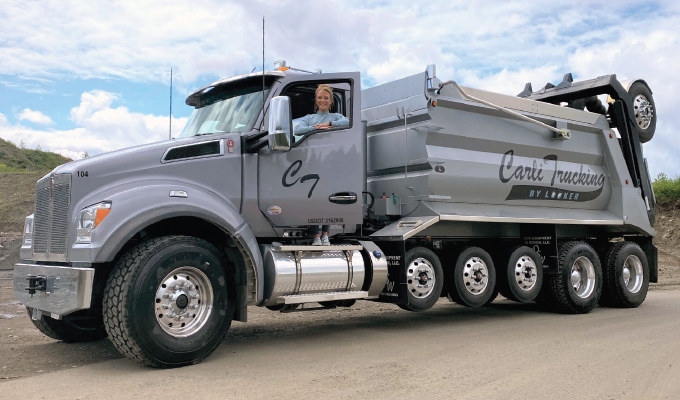 When Looker first began driving for herself, she initially delivered asphalt exclusively for Looker Asphalt. But that didn’t last long. Looker quickly made connections with other contractors in the area and delivered all sorts of material such as dirt, crushed rock, asphalt, among other aggregates. When road building subsides in the winter, Looker stays busy hauling dirt for other construction projects.

In two short years, Looker added three new seven-axle Kenworth T880S trucks with OSW Super Dump bodies. According to Looker, Barry suggested that a transition to the T880S could add an additional 1,000 lbs to her payload. The T880S with the set-forward front axle is the go-to configuration for Kenworth customers whose vocational trucks need to meet the federal bridge formula. Looker’s T880S trucks are equipped with 510-hp PACCAR MX-13 engines and Allison automatic transmissions.

Looker’s trucks only run a 120-mile radius, but each of her four trucks typically averages 45,000 miles per year. Depending on the time of the year, Looker’s trucks can run around the clock with only a 2 to 3-hour break in a 24-hour period. Other times of the year, her trucks run regular 8-hour shifts.

The most recent projects the company has worked on include re-paving city roads in Tacoma and sections of Interstate 5, just south of Tacoma.

Looker said that her drive to deliver quality and on-time service is backed by operating reliable and efficient equipment, which has been key in the company’s sustained growth.

“It’s all about establishing trust and providing consistent quality services to the contractors we work with,” Looker states. “And running trucks that are well-built and stay on the road and out of the shop is an important component to that.”

As a female in the industry, Looker used to garner a bit of attention when she’d drive up to jobsites in her dump truck. However, she says that’s beginning to change as more women enter the industry. Looker says if you’re nervous to be a woman in a male-dominated industry, it doesn’t take long to prove yourself. “If you are confident in what you’re doing, then your confidence is going to shine through.”

However, even though Looker’s customers have grown to trust her and she has built meaningful business relationships, Looker admits to feeling the need to continuously prove herself. “Because there are few women driving vocational trucks, let alone owning their own trucking business, I feel an added weight on my shoulders. But, I believe the reputation the company has earned the past few years is a testament to the hard work we’ve put in.”

Although Chelsy Looker has a ways to go before she meets all her trucking career goals, her determination, dedication, and work ethic have proven to herself and others that going from one industry to a completely different industry is possible. What started as a one-truck company quickly grew and has even thrived through the COVID-19 pandemic. All you need is a little know-how and a lot of confidence to get the job done.