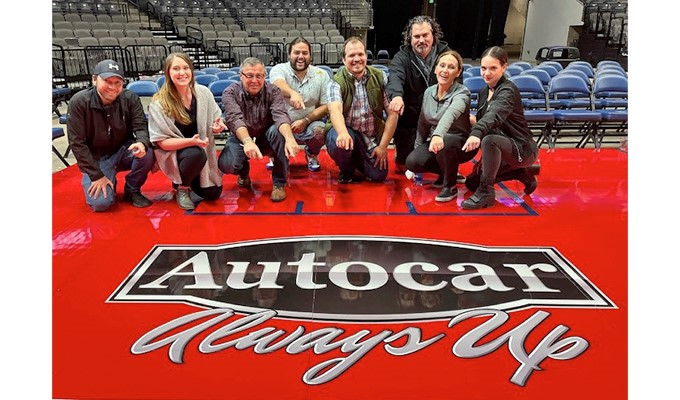 Autocar, exclusively focuses on building the best trucks for the vocational truck market and is the only 100% American-owned company that assembles all of its trucks in the USA. In addition, Autocar-brand trucks support critical American infrastructure sectors such as refuse, material handling, concrete, and logistics.

“As a proud Birmingham company, Autocar is excited to be a sponsor of the Birmingham Squadron,” says James (Jimmy) Johnston, president of Autocar Trucks. “At Autocar, we know the importance of putting down roots in your hometown and feel strongly that the Squadron sponsorship is an ideal way to extend our commitment to the city of Birmingham and demonstrate to our fellow Birminghamians that we’re proud to be part of this community and want to support it as it grows.”

Autocar inked a five-year sponsorship contract with the Squadron—the only Birmingham-based to do so. As a result, the OEM has two logos on the basketball court at the newly renovated Legacy Arena. Additionally, Autocar sponsors the Squadron’s Autocar Truck race of the game and the Autocar Always Up dunk of the game. There is also an Autocar section of fans at each game with tickets provided by Autocar.

The addition of Autocar Truck as a corporate partner to Birmingham Squadron brings opportunities to the team and the organization. Autocar joins more than two dozen corporate partners for the minor league team alongside Mercedes Benz, Coors Light, Sheraton, etc.

The Squadron provides Birmingham and surrounding residents with a thrilling opportunity to see NBA-caliber talent as it develops. About 45% of NBA players come from the NBA G-League experience. The G-League provides players, coaches, officials, trainers, and staff with an opportunity to prepare for a future with the NBA.

Established businesswoman and billionaire Gayle Benson currently owns the Squadron and strongly supports the Birmingham community. She also owns the New Orleans Saints of the NFL and the New Orleans Pelicans of the NBA.

“We are proud to call Autocar a partner of the Birmingham Squadron,” says David Lane, Squadron general manager of business operations. “Aligning ourselves with Birmingham-based companies and building long-term relationships was a point of emphasis for our organization, especially in our inaugural season. Partnering with Autocar was a perfect opportunity to connect with the community and help grow a pillar of the Birmingham business community. We are looking forward to a mutually beneficial relationship with Autocar for many years to come.”