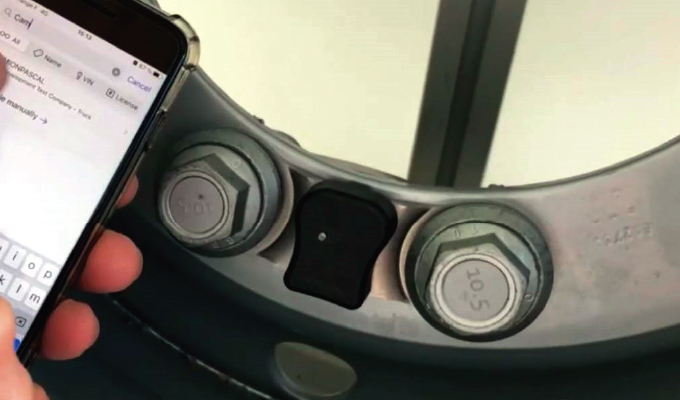 The SKF TraX wheel end monitor is installed on the outboard side of the wheel’s rim on two wheel studs and secured with lug nuts.

Telematics, the use of telecommunications technology to collect, store, share, and analyze vehicle data, has automated the management of fleet fuel consumption, maintenance, repair, and safety. The technology’s efficacy led the State of California to require its “service to be installed, activated, and made operational on all owned assets in their fleet” back in February of this year. Light-duty vehicles have already been required to use telematics since August 1, 2021.

According to a recent article in Forbes, 30 to 40% of fleets in the United States use telematics to monitor and maintain their vehicles. Of these vehicles, 66% have recovered their investment. The article also reports that the global telematics market is predicted to reach $103 million in 2022.

Among the devices used with telematics technology is the wheel end monitor (WEM), which is a sensor installed on a wheel to measure the wheel end vibration and temperature to detect any anomalies. It uses wireless telecommunications technology to notify the driver in advance of any conditions that could compromise the operation and safety of the vehicle. Typically, warnings are made with flashing red LEDs. An example of such innovation is the SKF TraX WEM, which uses intelligent technology to monitor and report on the condition and temperature of wheel end bearings on buses, trucks, and trailers. It will interface with all telematics service provider (TSP) technology via the cloud. It also will operate as an SKF iOS smart mobile device app and is compatible with all commercial vehicles, as well as all types of wheel end bearings and existing fleet management systems.

The TraX WEM is a battery-powered wireless sensor that is retrofit-mounted on every wheel. Easily integrated with existing wheel end systems, it is installed on the outboard side of the wheel’s rim on two wheel studs and secured with lug nuts. The magnetically activated sensor captures wheel end bearing data, pre-processes it, and transmits it via the Bluetooth Low Energy network to a gateway and displays the appropriate information on the cabin dashboard. It will interface with the Portal, Internet of Things (IoT), email, and text to alert drivers and others who monitor these vehicles.

WEM technology screens wheel end bearings to detect vibration, which is often the result of raceway spalling that occurs when seals fail to prevent particles from getting into the bearing system. The particles create indentations in the raceway when elements in the assembly roll over them, which leads to surface fatigue that causes fragmentation. The bearings vibrate as the rolling elements run over the spalled raceway surfaces. The spalling and vibration usually get progressively worse over time, but a WEM system can detect, measure, and analyze the vibration in the early stages of spalling. If the data indicate that the wheel end is sustaining damage, the driver is notified of impending bearing failure thousands of miles before the likely interruption of service. Advance notice occurs in nearly real time and provides an ample opportunity to keep the vehicle in service and schedule repairs at the driver’s convenience to avoid interference with fleet uptime.

A WEM system can also detect and report extreme heat in the wheel end, which can cause a thermal event. The warning may indicate a potential wheel end fire or a level of bearing damage that can result in the wheel separating from the vehicle, known as a wheel-off accident. Because of the safety risks of abnormally high temperatures, their detection will result in the WEM system notifying the driver to pull over immediately.In addition to greater safety, the use of WEM technology to detect potential wheel end bearing failure helps control costs by preventing breakdowns that result in unplanned downtime and costly repairs. A WEM system also can facilitate regular condition monitoring, inform predictive maintenance, extend service intervals, and relieve the driver of the responsibility for reporting wheel end issues.

Consistent condition monitoring will detect wear earlier and eliminate the need for preventive wheel bearing replacement. This allows the wheel bearing to be used for its entire intended service life, which further reduces the cost of ownership.

When the SKF TraX WEM was installed on the wheels of a 5,000-vehicle trailer fleet, the operation saved $3.6 million each year by predicting and avoiding unplanned maintenance and downtime. Avoiding thermal events also saves money, as each event can cost as much as $1.5 million.

The example demonstrates the benefit of integrating telematics technology in commercial fleets. Using current wireless telecommunications technology, the fleet can reduce costs by extending the time that the wheel bearing is used through its entire life cycle, as well as anticipate wheel end bearing damage well in advance to avoid the disruption of delivery schedules when the vehicle requires immediate repair. Most importantly, reducing the risk of catastrophic failure and thermal events increases safety for the driver and those sharing the road.