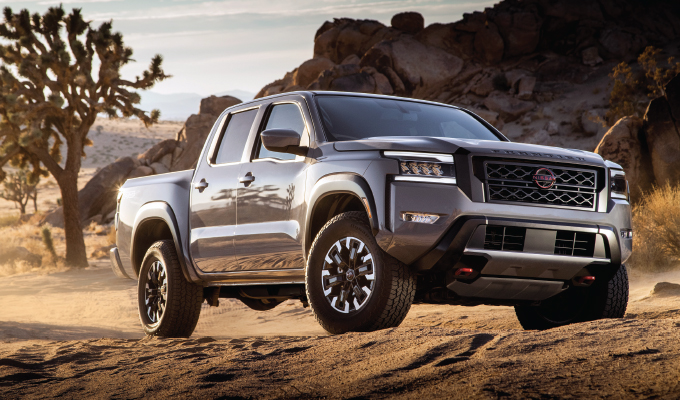 Picture it: It’s 2004. The year saw the final episode of the sitcom Friends. We learn of the deaths of Ronald Reagan and Pat Tillman. The Montreal Expos announce they’re moving to DC to become the Washington Nationals. A deadly tsunami floods coasts off the Indian Ocean. And, Nissan gave its Frontier a redesign that it would hold for 17 model years. But earlier this month, Nissan finally launched another redesign of its Frontier, breathing new life into a truck that endured the same look for almost two decades.

The new Nissan Frontier appears to have been finally brought into the 21st century. It features C-shaped LED headlights and running lights that hug its aggressive grille. It’s also got Intelligent Around View cameras—a first for a Nissan vehicle—that gives drivers a bird’s eye view of their truck when parking and when maneuvering in tight spaces (and while off road). This garage-sized truck is more than ready to take on your mid-sized loads—especially through some tough terrain.

The truck has a standard 3.8-L direct injection V6 engine that offers 310 hp paired with a 9-speed automatic transmission that Nissan designed to maximize the powertrain’s efficiency. Nissan added cab insulation to the new Frontier and a new rear stabilizer bar and hydraulic cab mounts that help make an off-road adventure quieter and smoother. Additionally, the new Nissan Frontier is capable of towing 6,720 lbs, and Nissan makes it easy, making sway control a standard feature on all Frontier models.

When duty calls, your Frontier is ready for action. It carries all your equipment in the bed with an available, factory-installed bed liner and integrated Utili-Track System. The bed also features an 110V bed outlet, a built-in bed step, and two LED bed lights—making your trip to grab things from inside the bed a breeze.

The cab of the Frontier is also capable of being a mobile office. It features a 9-inch touchscreen infotainment system complete with Apple CarPlay and Android Auto—standard! In-cab Wi-Fi is available as well as wireless charging and Fender premium audio. For comfort, Nissan brings its Zero Gravity seats as standard offerings. These seats were designed for long drives to minimize driver fatigue. The seats are engineered to allow the body to assume its most relaxed, natural position while supporting the hips and the back.

Further, what’s a mobile office without ample storage? Therefore, Nissan expanded the center console to 4 liters—that’s a lot of console space for a mid-size truck.

I can’t wait to get into this truck and see how it drives. Stay tuned for more about the Frontier coming to you from Modern WorkTruck Solutions later this year.