According to one survey, 46% of registered drivers ages 25 and older say “demands or pressure from work” lead them to glance at, read, or send emails while driving. Some drivers even operate under the false assumption that doing so isn’t dangerous, with 32% of respondents saying they think they can use their phone safely as long as they pay attention to the road.

At the same time, the study also found that approximately 62% of drivers are “very willing” to obey cell phone use laws. However, this willingness doesn’t necessarily match their true mindset. Despite 48 states banning texting while driving and 25 states banning handheld use, respondents indicated it will take more than laws to change their behaviors. Approximately 61% said they would need to be involved in a near-miss and 59% said they would have to be involved in a fatal crash to be dissuaded from using technology while driving.

If laws aren’t enough to change this dangerous behavior, what can help drivers make the connection between the risk and the reality of cell-phone use while driving?

The study revealed that enacting a distracted driving policy and using technology to enforce it can be a powerful combination, with 56% of respondents saying they believe employers’ policies are effective distracted driving deterrents and 57% saying that if their vehicle came with solutions to eliminate distraction while driving, they would not turn the features off.

When commercial fleets search for ways to change drivers’ perception of risk, the convergence of policy and technology is a simple and effective solution to breaking the bad habit of cell phone use while driving and creating safer roads in the process.

Distracted driving comes in many forms, all of which threaten the safety of drivers and those around them. These fall into three categories:

Activities that fall within these categories include talking on cell phones, eating, talking with passengers, and adjusting vehicle controls, among others—and any of them can cause a crash. But texting, dialing, or video calls while driving are the most dangerous, as they involve all three types of distraction: eyes off the road, one hand off the wheel, and mind off the road. That’s a very dangerous combination.

For instance, when you send or read a text message, you take your eyes off the road for about 5 seconds; that is long enough to cover the length a football field while driving at 55 mph. That leaves a lot of time for the worst to happen. It’s no wonder, then, that cell phone use continues to be a major contributor to crashes. According to the National Highway Traffic Safety Administration (NHTSA), inattention is a factor in up to 25% of all vehicle crashes, making distracted driving one of the most serious concerns on roadways today. Research shows that distracted drivers are two to 48 times more likely to get into a collision. Specifically, texting, emailing, or surfing the internet while behind the wheel increases the driver’s chances of getting into a crash by 23 times. Worse, cell phone use while driving is reported as a factor in more than 18% of distracted driving fatalities. 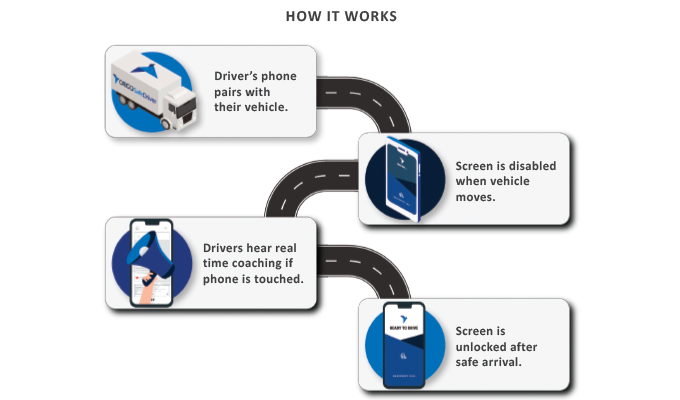 Technology doesn’t simply reduce cell phone use while driving—it eliminates it. For instance, ORIGOSafeDriver, a telematics integrated software solution, keeps commercial drivers accountable by removing the temptation to use their phones while dirivng. By pairing easy-to-plug-in hardware that syncs with a mobile app, once your driver’s vehicle goes into motion, it removes the manual and visual distractions. Hands-free calls via Bluetooth can be allowed by the administrator as needed.

Even though it is an effective solution, it’s also easy for drivers to use. All they have to do is log into the app once during the initial setup, then they can remain logged in from there. No further action is required to make the technology functional.

At the same time, ORIGOSafeDriver doesn’t let drivers ignore it. If a user tries to drive their vehicle without having logged into the app, they will be alerted to log in—and will continue to hear the alert until the drivers logs in. If after two minutes the driver still hasn’t logged in, the fleet manager will receive a notification and can take the appropriate action. This behind-the-wheel coaching reinforces the perception that cell phone use while driving is dangerous and not allowed.

ORIGOSafeDriver is a cell phone safety and distracted driving company. Help make the roads safer by protecting your fleet with ORIGOSafeDriver. Find out more, visit www.origosafedriver.com.