SPD SmartGlass, shown here in a Mercedes-Benz S-Class, can be installed on any work truck.

Driving with the sun in your eyes is something that truckers and drivers of all kinds have dealt with since the beginning. There are already a couple of items on the market to offer some relief from that common annoyance. You’ve seen OEM visors, aftermarket visors, window tinting, vinyl wrapping, and even those simplicities we rely on every day, sunglasses and trucker hats. Yet these items aren’t always sufficient for keeping drivers from squinting in the sun.

An OEM visor only stretches so far. Aftermarket visors aren’t always up to quality standards. Window tinting is great during the day but could cause sight issues when the sun sets (not to mention, it isn’t legal everywhere). And not everyone employs a vinyl wrap around their whole vehicle solely for protection from the sun—nor is that the purpose of vehicle wraps. Needless to say, although there are options to reduce a driver’s strain when driving into the sun, none of the options offer a 100% worry-free, hassle-free solution.

It’s 2020. Isn’t technology advanced enough to offer a better solution for squinting in the sun, risking sun damage on a left arm from daily driving, and blasting the A/C because the sun pours through your windows and bakes you in your own cab? To answer the question: Yes, technology actually is advanced enough. Research Frontiers developed an electrically tintable window technology called SPD-SmartGlass.

SPD stands for “suspended particle device,” and it changes the tint of any window by electrically aligning tiny particles in a thin film within the glass or plastic. Joe Harary, Research Frontiers’ CEO, explains, “When you apply voltage to the film, the particles line up and allow light to pass through. When there’s no power involved, the glass is very dark.”

How dark? Joe says SPD-SmartGlass blocks 99.5% light. This glass puts drivers in control of how much light passes into their cab. Depending on the application, drivers can adjust the brightness in their cab by a knob or adjustment on a smartphone application similarly to the way they adjust the backlight brightness on their personal phones and tablets. Joe says some SPD-SmartGlass currently in use is compatible with Amazon Alexa, allowing users to change the brightness using only their voices. Other options include photocell-enabled glass that automatically adjusts the tint according to the sun, similar to some eyeglass lenses used by thousands of people today.

For drivers of work truck fleets who are in their cabs all day every day, SPD-SmartGlass’ photocell-enabled glass keeps drivers’ hands on the wheel and their minds on the task at hand, driving the truck instead of focused on adjusting window tint or their truck’s visor. But there are more benefits than the need to no longer squint in the sun. 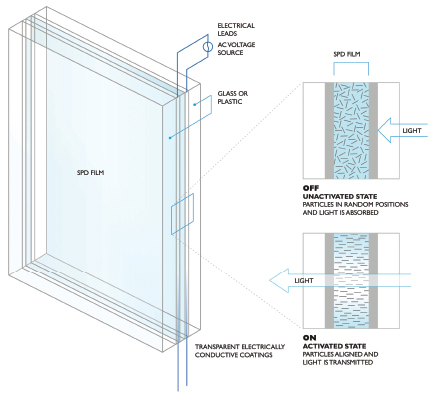 Aside from the obvious benefit of keeping drivers from squinting, SPD-SmartGlass installed on all windows blocks harmful sunrays. Remember the driver whose left arm is always pink? Or the driver who’s had multiple visits to the dermatologist due to sun damage? The New England Journal of Medicine (NEJM) states that Ultraviolet A (UVA) rays pass through truck windows and penetrate the skin. Those UVA rays are linked to the formulation of skin cancer. After years of driving, those lucky enough to escape cancer will still see thickening and wrinkling of the skin as well as destruction of the skin’s elastic fibers, according to NEJM. This causes a premature aging effect on one side of a driver’s face. For an older driver who’s exposed their skin to sun damage every working hour for decades, a UVA-blocking solution would be a welcome addition to any truck.

The next benefit is much less important than your driver’s health, but it’s worth mentioning nonetheless. Blocking UVA rays from entering the cab also helps prevent wear and sun damage to your truck’s interior. Intense heat from the sun on the dash can cause it to crack, components to fade, and for seats to become hot plates for bums after exposed to the sun all day. Regardless of whether it is dark or clear, using SPD-SmartGlass can prevent your dash from cracking, interior colors from bleaching, and prevent leather seats from scorching your legs and receiving damage and wear from sun exposure.

Finally, SPD-SmartGlass can increase energy efficiency. Joe says that according to Mercedes, when the film is enabled, cabin temperature is reduced by 18 degrees. That keeps your cabin at a reasonable temperature even after it has been parked in the sun all day. With no need to blast the A/C, your engine puts more power on the road.

Joe says SPD-SmartGlass is quite easy to implement into the work truck industry. “Our film gets laminated inside of glass or plastic,” Joe says. It can be used on all window surfaces from a sunroof to the side and the rear quarter windows. Aside from already available aftermarket solutions—one being a fold-down visor—Joe says there are several OEMs developing SPD-SmartGlass into truck production.

“It’s not science fiction—it’s reality,” Joe says. “It’s been proven in (the automotive industry) across tens of thousands of cars. It’s also been used in aircrafts to replace the shades on the cabin windows, and also it’s been used in yachts, homes, and offices. It was even the glass in the roof of the USA Pavilion at the World’s Fair in Milan.”

The SPD-SmartGlass options already available for the industry include the aforementioned fold-down visor as well as custom side and rear window films. The fold-down visor is designed to be plug and play. It is made from SPD-SmartGlass’ film embedded into the glass or plastic of the visor that uses no power when dark and very little electric power from the truck when it is used on a clear day. Solar-powered and battery-powered options are also available. This visor can be easily wired to the truck’s electrical system, similar to the way one would install an aftermarket radio system.

MAKE IT A REALITY

Although Ray-Ban Aviators are tried and true and favorite trucker hats have rested on heads for years, your drivers might find no need for them once they experience SPD-SmartGlass technology. Blocking UVA rays will also prevent premature aging in your drivers or worse, cancer. You might also see an increase in your bottom line if drivers no longer feel the need to blast the A/C.

This is 2020. We’re in the 21st century, and technology shows it. Make this science-fiction sounding technology a reality for you and your drivers.