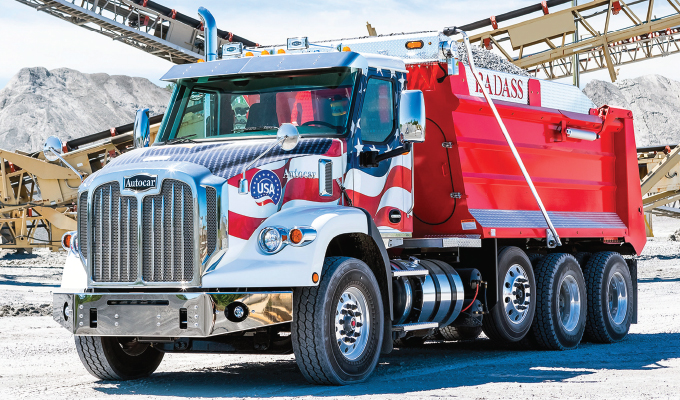 Who knew a tricycle powered by a one-cylinder gasoline engine built in 1897 would lead to Autocar’s “BADASS” severe-duty vocational dump truck in 2021? Probably not Louis Semple Clarke, inventor of the aforementioned tricycle—dubbed the Autocar No. 1. Nevertheless, Louis Semple Clarke, or “L.S.” as he was known, founded the Pittsburgh Motor Vehicle Company shortly after creating the Autocar No. 1, thus beginning the Autocar legacy.

A year after the Autocar No. 1 was born, Autocar introduced its Autocar No. 2, a four-wheeled vehicle called “The Pittsburgher.” Then a year after that in 1899, Autocar built the first motor truck that was commercially available in the United States.

Autocar’s first truck, the “delivery wagon,” was built to deliver and carry packages. The intent behind the design was to create a vehicle so easy to operate that any driver could “operate it with more safety than he could drive a horse.” The delivery wagon had a payload capacity of 700 lbs and the option of a 5 horsepower or 8 horsepower motor. The delivery wagon featured an “engine-under-the-seat” design, which essentially led to Autocar’s Cab-Over-Engine design used in its trucks today. 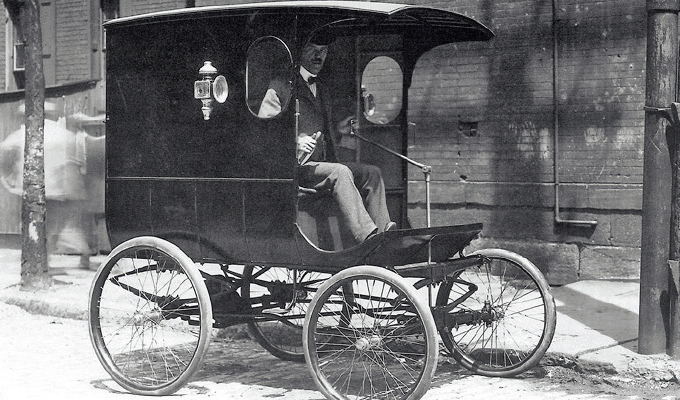 Through the first decade of the 1900s, Autocar saw success and became the first company to use products and designs that are standard on today’s vehicles. A few of those innovations include left-side drive (center-drive was common at the time), the first American shaft-drive vehicle replacing chain-drive, double reduction rear axle, and a circulating oil system.

In 1911, Autocar produced its last motor car. The company chose to solely focus on trucks with custom engineering and purpose-built tools for the demands of commercial and municipal customers. Within 10 years after the decision to focus only on trucks, Autocar offered three different trucks with capabilities from 1-1/2 to 6 tons, various wheelbases, and conventional as well as under-the-seat engines.

Nodding back to its earlier innovations, Autocar launched the Model U, bringing back the engine-under-the-seat design. The Model U was chosen by the Washington, DC City Refuse Department for refuse and hauling routes. 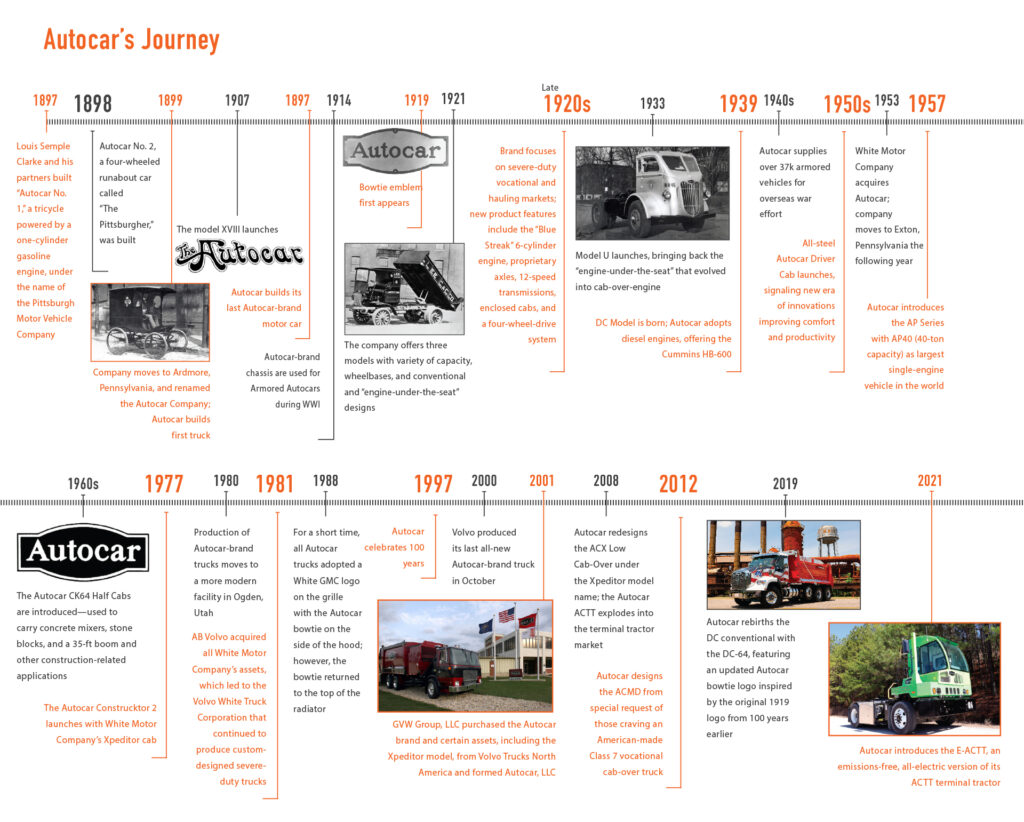 The effects of WWII brought on efforts to spend less and reduce costs. Because of this, Autocar adopted diesel engines, offering the 672-cu-in, 150-hp Cummins HB-600. As a result, Autocar diesel trucks were less costly to fuel compared to gas-powered trucks, and they hauled heavier loads. 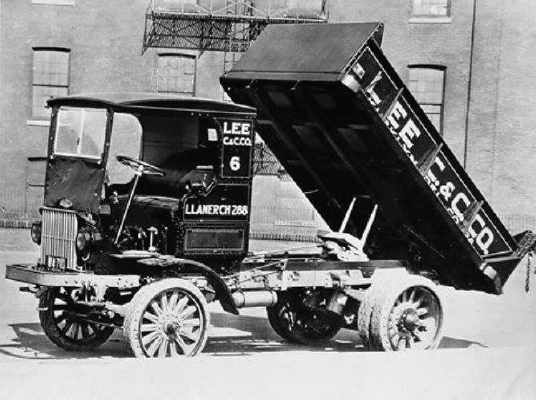 Autocar continued building custom, heavy-duty and severe-duty trucks. Its “custom-engineering” designs are what it became known for—making each customer’s truck a perfect asset to their business. By the early 1950s, Autocar grew its company-owned dealer network to more than 100 locations. In 1953, White Motor Company acquired Autocar and moved production to a new facility in Exton, Pennsylvania. As a result of the acquisition, Autocar was then able to offer White’s Mustang engine along with Cummins and Detroit Diesel engines in its trucks.

Autocar introduced its AP Series in 1957, ideal for extreme-duty on-and off-road construction, logging, oil field, and mining applications. Part of the AP Series, the AP40 had a capacity of 40 tons and was the largest single-engine vehicle in the world. Later, Autocar built its CK64 Half Cabs used to carry concrete mixers, a 35-ft boom, stone blocks, and other construction tools and equipment. Other custom workhorses included Autocar’s 900,000-lb GCW AP19T with a V-12 Cummins engine, a 30,000-lb tubular front axle, and 200,000-lb tandem rear axles. Today, the Autocar ACTTs carry the DNA of the CK Half Cab trucks. 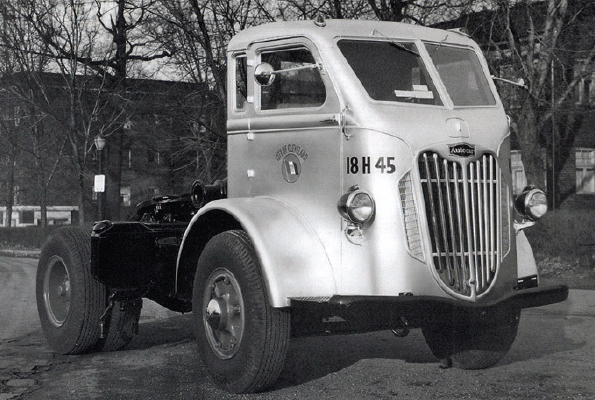 END OF AN ERA

AB Volvo acquired Autocar and all of White Motor Company’s assets in 1981, forming The Volvo White Truck Corporation. But this didn’t stop Autocar from building custom-designed, severe-service trucks. However, in 1986, Volvo White acquired the heavy-truck business from General Motors, resulting in Volvo GM Heavy Truck Corporation. In December 1987, the last Autocar with the Autocar Driver Cab, first launched in 1950, rolled off the assembly line. The next year, Autocar trucks featured the Autocar bowtie logo on the side of their hoods, while a White GMC logo took a prominent spot on the grille. Later, the bowtie returned to the top of the radiator, and Autocar celebrated its centennial anniversary in 1997. But three years later in October 2000, Volvo produced its last Autocar.

Legends never die, and neither did Autocar. In 2001, GVW Group LLC purchased Autocar and the Xpeditor truck model from Volvo Trucks North America, forming Autocar, LLC. Focusing once again on its roots, Autocar went back to purpose-building severe-duty trucks. Autocar once again became a major player in the refuse market that it pioneered with the Model U back in 1933. Additionally, Autocar modified its Xpeditor to fit a range of vocational applications including gravel conveyors, concrete pumpers, paint stripers, and mobile cranes.

Autocar continued modifying its Xpeditor, releasing the Autocar ACX Low Cab-Over under the name. Since this truck brought many “firsts” to the market—such as an ergonomically designed cab, integrated body controls, and B-pillar corner rear windows—naturally, the vehicle grew quickly in the market.

Then in 2012, Autocar introduced its ACMD, the only American medium-duty cab-over-engine truck, which Autocar designed by special request from companies that desired an American-made Class 7 truck. Autocar since expanded the ACMD into the Class 8 segment.

Finally, Autocar brought back its iconic DC conventional truck in 2019. First introduced in 1939, the new version of the Autocar DC was the first to carry Autocar’s refreshed bowtie logo—100 years after the logo was first introduced. 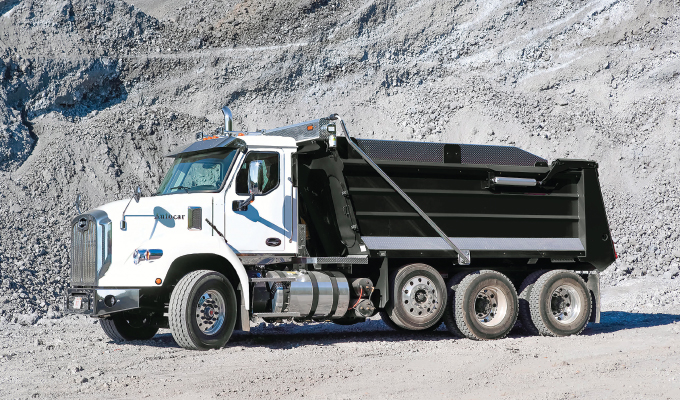 Find out more about Autocar’s journey and 125 years of innovation, visit www.autocartruck.com.